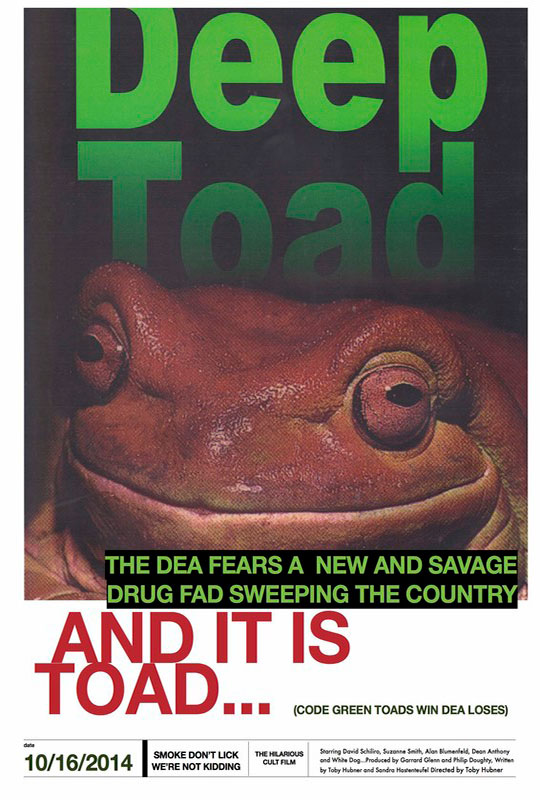 Deep Toad was based on a Wall Street Journal article which described the real life dilemma of the DEA, faced with a new drug fad powered by the presence of millions of Colorado River toads emerging from their winter hibernation and secreting, during an orgy of monsoon mating and eating, a toxic venom that can be dried and smoked and is, to put it lightly, highly hallucinogenic. Fearful of an unlimited source of psychedelics which hadn't even been outlawed yet, the DEA sent agents to penetrate the scene. That's the STARTING POINT for Deep Toad, a whacky satire on the drug war. The film enjoyed a renaissance of late when it was discovered by Mario Garnier, who organised the first Worldwide Bufo Conference in Mexico City. Mexico has moved to declare the Bufo Alvarius toad, the same psychedelic toad featured in Deep Toad, as a national sacred resource. History, and medicine, caught up with Deep Toad. A big subject in Deep Toad is "What happens when you leave your body?", which we found out, when making the film, actually happens when you smoke the venom. Lately its sister drug, ayahuasca, has been used for therapy in the Amazon, treating violent criminals and depression, and other mental illnesses. Mario Garnier succeeded in attracting shamans, philosophers, psychotherapists and wise men from throughout the globe to his conference, the first of its kind. Yes, it was a serious event, for a serious substance. But on the last night before the dinner and closing party, they screened Deep Toad. We were honoured to have those wise men, those shamans, the psychedelic pioneers, laughing their you know what's off at our whacky and before its time film. One thing that amazed me. The comedy, and the laughs, and the relevance of this satire stand up.

Toby Hubner recently wrote/directed and produced two movie musicals, We Are Kings and Soul Guys. They are the first two legs of a trilogy of movie musicals. Deep Toad was Hubner's first directorial and writing effort. Previously Hubner was a Producer of independent movies, including Hard Choices, Manhattan Moonshine and The Big Giver. Hard Choices was distributed by Warner Bros and picked by Roger Ebert as one of his top ten films of the year. Hubner started his career working in Hollywood as a development executive for Tomorrow Entertainment, which produced two hour TV movies and series for the networks, including The Autobiography of Jane Pittman, and Roll of Thunder Hear My Dry. Hubner developed numerous projects for the studios, including Big Hospital for United Artists , Groucho for HBO, and The Stolen Man for Warner Bros. He is a graduate of Williams College.