Cryptopia: Bitcoin, Blockchains and the Future of the Internet

Bitcoin has been called one of the most disruptive technologies of our times, threatening banks by building an alternative and decentralized currency system. Its “blockchain” could provide a blueprint for a better Internet – challenging the dominating technology giants. Despite this potential, Bitcoin is undergoing severe price volatility and the community is facing a bitter internal ‘civil war’. Moreover, much of the media coverage is often misinformed or misleading and the general public is still confused about the technology and its larger implications. Can this technology, designed to operate independent of trust and within a decentralized network, really provide a robust alternative? Can it and the people behind it be trusted to secure elections, prevent financial meltdowns and keep our private information safe? Or are cryptocurrencies just as unfairly distributed, easily manipulated and dangerous as our current systems? Join award-winning filmmaker Torsten Hoffmann four years after his first Bitcoin documentary on his journey to find the answers to these important questions that may redefine the future of the Internet (web3.0). He meets with the big brains and big egos of this new industry. Some of the hackers, hipsters and hustlers that Torsten met 5 years ago have broken their promises; can we trust them to build a trustless new cyber utopia? 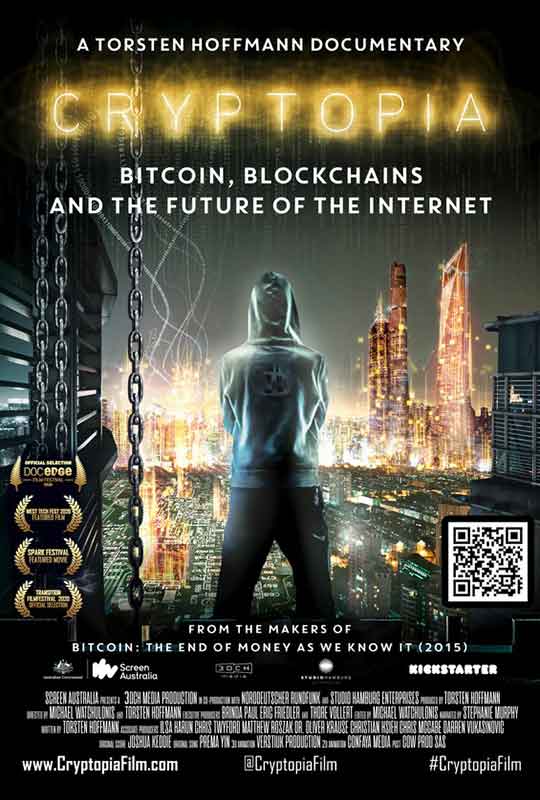 Torsten Hoffmann is a producer of documentaries and an adviser to filmmakers. His debut as director has won four international festival awards: "Bitcoin: The End Of Money As We Know It" (2015) went viral on the Internet and was licensed (VOD/TV) to more than 40 territories. He kickstarted and self-funded the project in 2014 when Bitcoin was a fringe phenomenon. The follow-on documentary #CryptopiaFilm will be released in 2019.

Torsten has been a popular speaker at major media and technology events and conferences. His engagements as moderator, panelist, jury member and speaker have taken him to 5 continents and include Cannes (9 times), Los Angeles, Seoul, Paris, Singapore, Beijing, Capetown, Hamburg, Brussels, Johannesburg, Munich, Tokyo, Copenhagen, Melbourne. He mainly focuses on the intersection of technology and content with a particular focus on content monetization of emerging content formats such as 3D, 4k, 8k, 360, VR. His Melbourne-based business specializes in distribution of factual content.

Previously, Torsten was a Managing Partner at a global media consultancy and a middle manager at a European cable TV company. He received a Finance MBA from Oxford University and has lived, worked and studied on four continents.