The Body Fights Back

The Body Fights Back is a feature documentary about five people navigating the paradoxes of diet culture. While promises of happiness, desirability and perfection are irresistible, joy and contentment remain out of reach.

Personal stories from vastly different backgrounds quickly merge into a shockingly similar experience of battling one’s body. Self-starvation and compulsive exercise bring temporary satisfaction, only to be replaced with binging and purging soon after. Surprisingly, none of it has much to do with food.

Featuring exclusive footage from London’s contemporary anti-diet movement and fascinating personal archives, the film offers a unique insight into the complexity of eating disorders, body image struggles and most importantly, the socio-economic realities of health. 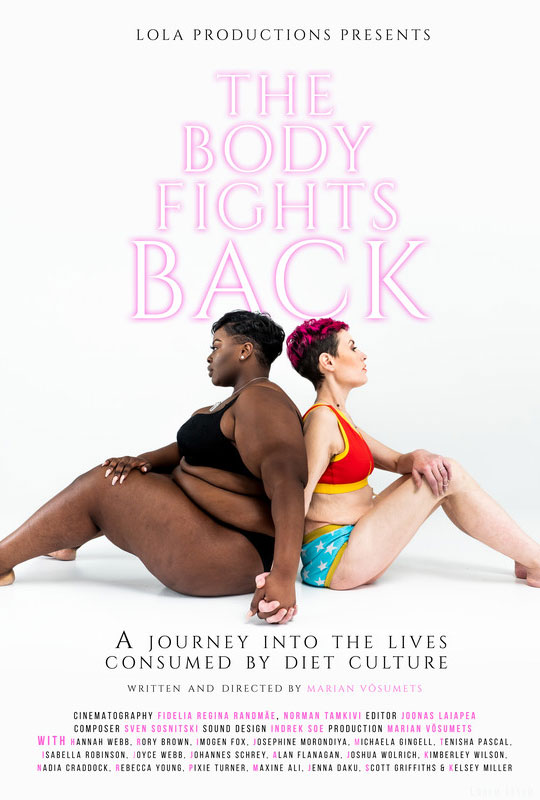 Marian first began her career as a health journalist, then moved on to directing television documentaries and presenting news reports for Estonia’s Channel 2, with a focus on international politics and factual entertainment. Her two most notable documentaries tap into Brexit protests in London and Eurovision fandom in Israel, both aired in 2019.

In 2020, Marian was awarded Best Television Reporter at the annual Estonian Film and Television Awards (EFTA) gala in Tallinn. The Body Fights Back is her debut feature film.

Marian holds a BA in History from Tallinn University, having decided from the start that this is the field that will help her become the journalist with a broader scope. Her thesis focused on the execution and manifestation of Soviet propaganda in the Estonian Radio during 1940-1941, and questioning the impact of political agendas has been the backdrop to much of her later work.

With an intuitive sense for storytelling, she masterfully combines visuals with narrative, drawing attention to meaning in places often overlooked in daily life. She believes and proves that novelty appears where disciplines overlap – in her case history, journalism and filmmaking.