The 72nd Academy Awards telecast aired on March 26th, 2000 live from the Shrine Auditorium in Los Angeles. Over 46 million viewers tuned in, and it currently stands as the highest rated Academy Awards telecast of the 21st Century. Critically acclaimed and technologically advanced, it was produced by the late Richard Zanuck and his wife Lili Fini Zanuck, and hosted by Billy Crystal. The press wrote: “It was clean, snappy, high- gloss, and very well produced. And this year Billy didnʼt have to save the show!” The live telecast was directed by Louis J. Horvitz, who is one of the most prolific live television directorʼs in Hollywood. Over the course of 4 days, the director’s assistants Steve Race and Micah Kwamina were granted unprecedented access to the behind the scenes action. Armed with only a GL1 Cannon Digital Video Camera, no sound equipment, and not even a tri-pod, they captured what goes into to making the biggest show on earth. For the first time ever you get to see how the show is put together, from the rehearsals to the actual show itself. In the end you are left with an appreciation for what it takes produce the Academy Awards, otherwise known as the Oscars! 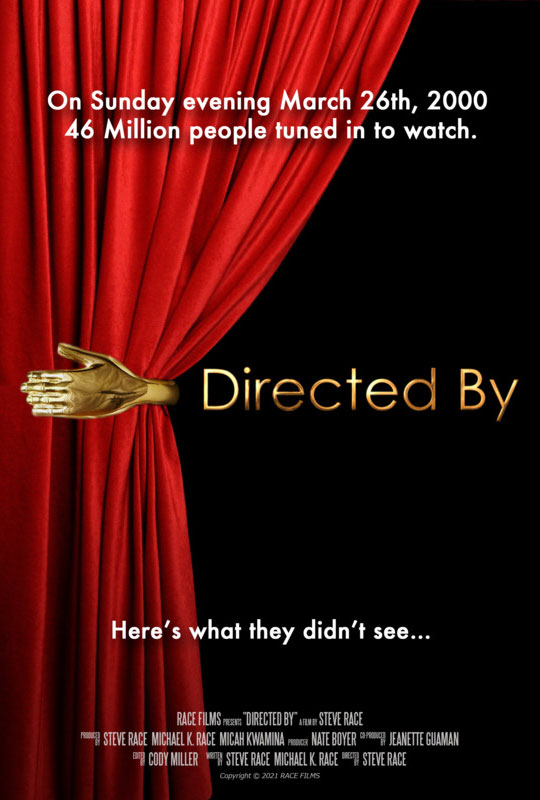 Steve Race is one of the top up-and-coming Directors in the entertainment industry. In 1996, he earned a bachelor’s degree in Film and Television Production at Florida Southern College. Upon graduating, he made his way out to Los Angeles to pursue a career in show business. He landed at A Louis J. Horvitz Production working as a Director’s Assistant to Mr. Horvitz, who is known as one of the most prolific Directors in Television, winning numerous Emmy Awards. Alongside his mentor, Steve worked on such shows as the 1999 and 2000 Academy Awards (Oscar’s), 1999 Emmy Awards, Peoples Choice Awards, Net Aid Live, and countless other Television specials. In 2001, Steve ventured out and started directing a number of projects on his own. When the Latin Grammy’s wanted to throw an event to launch the First Annual Latin Grammy Award’s they called Steve and hired him to produce and direct the 15 camera event hosted by Daisy Fuentes called, Latin Style. In 2003, he was asked to Direct the First Annual Visual Effect Society Awards where Lord of the Rings swept, winning in all 12 categories. Steve got involved in Comedy as well that year, teaming up with Code Black Entertainment to produce and direct 10 volumes of the very successful Latino Comedy Fiesta series. Then Steve moved on to direct a 10 camera Comedy DVD hosted by Brett Butler, called “Brett Butler presents, The Southern Belles of Comedy”. Moreover, Steve and his producing team that includes Henry Winkler started developing a documentary series entitled “Firefighter’s” the series. Firefighter’s follows the men and women of the Los Angeles City Fire department. In 2011, Steve made his directorial debut with the feature film called, “I’m In Love With A Church Girl” starring Jeff “Ja Rule” Atkins and Adrienne Bailon. That year Steve became a member of the Director’s Guild of America. Additionally, this film opened as the #1 independent film in America and played on over 450 screens in 2013. This film can now be viewed on Netflix. This lead him to start working on one of his passion projects, the feature film entitled, “The Story of My Family” which is a coming of age film that looks at the modern day family dynamics in the ultimate cultural melting pot of the San Fernando Valley, CA. In which, Steve penned this screenplay, producing and will be directing as well. Also in the works is “All In”, an NFL faith-based film based on the New York Giant Super Bowl Champion, Chase Blackburn. This film is an uplifting inspirational story about following your dreams and never giving up. In which he is attach to direct and is producing this film. Furthermore, he has completed his baseball screenplay called “The Past”. “The Past” is about Andre Walker, a modern day professional baseball player, that gets hit in the head with a baseball transporting him back to the 1940’s where he has to earn his way back to the future. Most recently Steve completed his documentary feature film, Directed By. Directed By is the first ever behind the scenes look at what goes into the making of the Academy Awards. Shot in 2000 the film features unseen footage, rehearsals, and backstage footage with some of the biggest stars in Hollywood. Steve is also involved in producing and directing video content for US Medical Innovations. The content includes shooting major cancer surgeries for research all over the world that is being used in the fight against cancer.