A Story Sewn and Bound with a Red Thread

Once upon a time a man lived with his wife Shuko and his four daughters, Kasumi aged 14 years, Sumire aged 11, Kikuna aged 9 and Nanoka aged 7. Shuko was the stepmother of the girls.
One day the man became very ill. The girls’ relationship with their stepmother worsened more each day. Shuko started to go out each night, the girls suspected it was so she could see another man. Also, the girls had to do extra work to support their father. As their grief and fears increased, the girls began to create and escape into their own fantasy world.
(Old theatre in the dark woods, a twisted Cinderella story and a mysterious dance.)
To escape from the cruel reality of their lives and to try to reconnect their father and stepmother, the four sisters decided to drown themselves in the river and leave behind them a suicide note which read “We asked our stepmother to stop her affair and look after our father”, but her reply was “That is none of your business, I don’t care if you die”. The suicide note went on to say “We know it will make our father sad, but we have no other choice but death. Stepmother, please love our father” and was signed by each of the four girls.
Only Kikuna came back alive.
[This artistic film describes a world of innocence and sensitivity as described by Shuji Terayama’s beautifully surreal verse.] 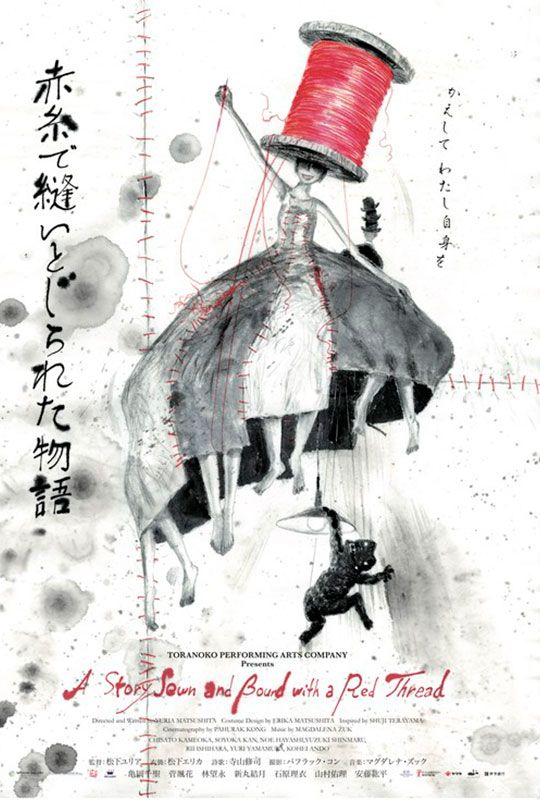 uria Matsushita was born in Ehime, Japan, in 1977. In 1998 Yuria Matsushita graduated from the London College of Fashion’s School of Make-up and Hair for Performing Arts. In 1999 she studied sculpture at the Academy of Fine Arts in Poznan, Poland then moved to Thailand, where she studied art and began to write poetry and scripts for stage and film performances. In 2000, traveling between Thailand and Japan, she worked in the production of films, fashion shows and exhibitions. In 2001, Yuria Matsushita’s film “TUTU” was among sixteen works chosen from 758 entries at the PIA Film Festival. In 2008 she directed the film “Canna Lily” for Maxwell Hi-Vision Theatre. In 2009 Yuria Matsushita received her Master’s Degree from Waseda University’s Graduate School of Global Information and Telecommunication Studies, majoring in Digital Cinematography. During that year, with her sister Erika Matsushita, she founded the thriving fashion company “Little Black Swan”, which produces timeless fashion accessories. Despite her work in “Little Black Swan”, Yuria Matsushita’s principal ambition is to continue to encourage children in the Ehime Prefecture of Japan to pursue their dreams and develop their individual creative talents.
Subscibe to Giff Video Channel