A Poet's Childhood - Awakening to Consciousness

This documentary film details the creation of poems by Elizabeth Martina Bishop and how they link to the poet’s biography.

Filmed in Dublin at Trinity College, an off-camera interview by Luke Daniel Holland introduces Elizabeth, born a poet. From childhood on she had astonishing insights into her talent for writing. This is a gem of a film which helps viewers understand the burgeoning of creative juices leading to poetic wit and an evocative outpouring uplifting viewers from all walks of life. 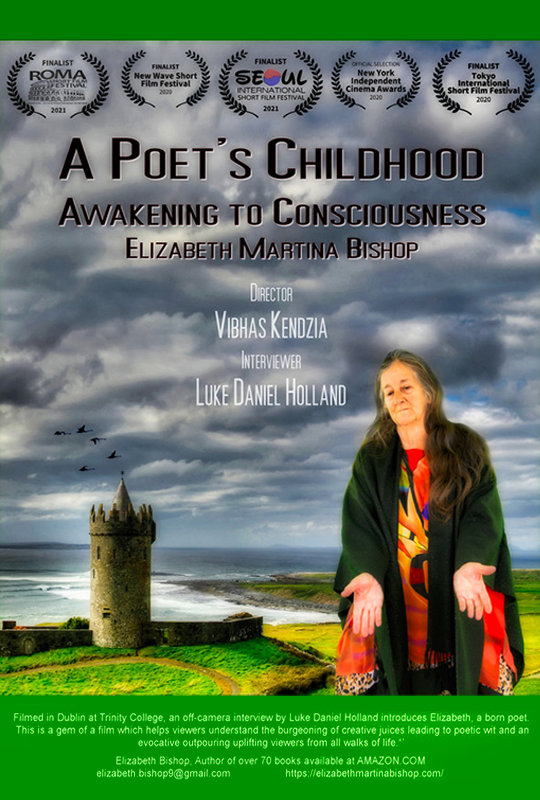 VIBHAS (Peter Alexander Kendzia) grew up in West Germany and studied piano and flute from the age of five. He had the privilege to study Flute with Rolf Bissinger, flutist for the Frankfurt Opera Orchestra, and Piano with Matitjahu Kellig, well known for his Mozart interpretations. Studies in Latin percussion and traditional instruments from many countries were all influential in his creation of original world music, melting genres from East to West.

Vibhas studied Music-Therapy in Cologne and Raststadt at the “Family Therapy Center Odenwald” Germany. He composed and recorded music for educational children shows and worked as sound editor for “Stein Video Production” and the Public TV Station “Hessen3” in Frankfurt Germany.

His work and personal curiosity brought him to India where he was introduced to meditation, and to the beautiful classical sounds of the Bansuri. He met and studied with world famous flutist Pundit Hari Prasad Chaurasia.

In 1997 Vibhas visited Sedona AZ where he first heard the haunting sounds of the Navajo flute. Playing these traditional native flutes around the Southwest for the last 20 years has brought him much praise from the local Native American population, who are fascinated by his intimate feeling for this ancient instrument.

Drawing on his background as a sound editor for TV productions he founded his company “Music from the Garden,” Recording-Studio, Music & Film Productions and Entertainment. He recorded with international Therapists guided exercises and meditations with his original music. You can find his music in movies, on Yoga-DVD’s and on web-pages..