Filmed in Juba, South Sudan, musicians encourage children to reject gun violence and choose education, peace, and unity. Produced by I Am Peace and The Jüdische Kulturbund Project in association with Jok Abraham Thon and Promised Land Secondary School. 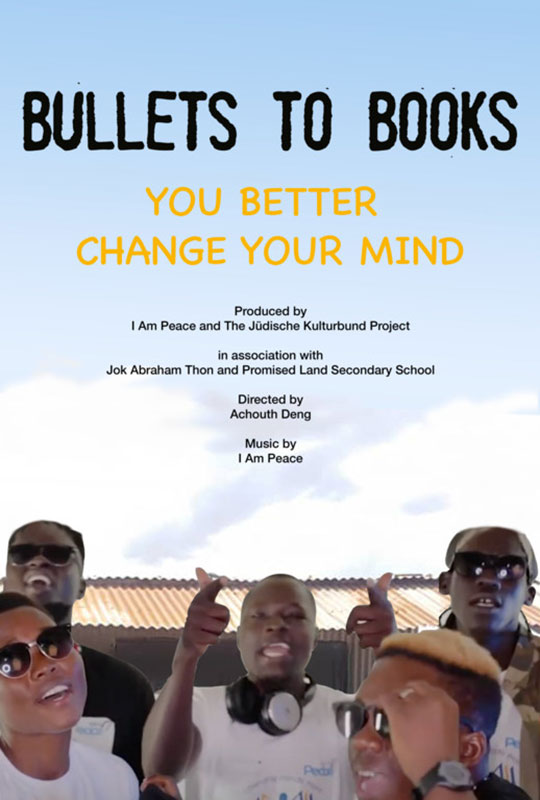 Achouth is an award-wining documentary photographer and filmmaker with over 10 years experience producing multimedia in South Sudan. In 2019, he won the Best Photographer Award from EU photo contest in Juba, South Sudan and the Oscar of African Creativity Award in Cairo, Egypt. As a professional photographer, he has produced numerous humanitarian documentary stories (both photo and video) for local and International non-governmental organizations in South Sudan; including IOM, SAFERWORLD, JAM AID INTERNATIONAL, DORCAS AID INTERNATIONAL, SAADO, LORETO RUMBEK, CROWN THE WOMAN among many others. Achuoth has also served as a Radio Creative Producer for over 5 years with a leading radio - Eye Radio. During his service, Achuoth produced numerous radio dramas, radio programs, feature stories, PSAs, etc. disseminating messages of peace and reconciliation, health and education across South Sudan Achuoth studied Mass Communications at East Africa School of Media Studies and Film Production at the Mohamed Amin Foundation, in Kenya respectively. He runs his owned media production company - AD IMAGES SOUTH SUDAN that is focused to renovating the media horizon in his country. Achuoth passion for storytelling is directed at transforming youth lives and addressing community concerns.
Subscibe to Giff Video Channel