My name is Mohamed and Raghad - Global Indie Film Fest

My name is Mohamed and Raghad, We don't exist here anymore 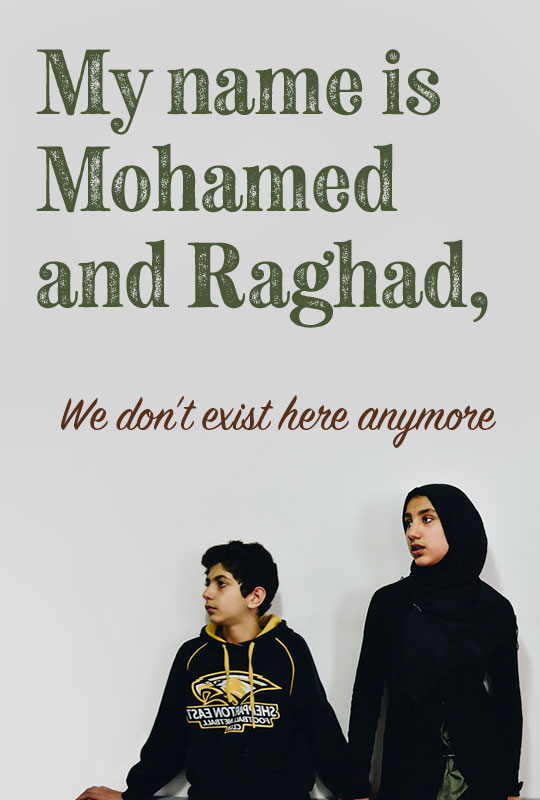 My name is Mohamed and Raghad

A one shot, twelve-minute film about a day in the life of an Iranian- Ahwazi asylum seeker family, surviving in Australia.

Mohamed is ten years old. Raghad, his sister, is eleven. They are Ahwazi asylum seekers, living with their father in Liverpool, Sydney. These children have grown up without their mother, brother or extended family who are all back in Iran. They have spent seven years in Australia, since arriving by boat with their father, making home however they can and fighting to unite their family.

We meet these young people on their way home from school. They are racing back to check on their father, who is gravely unwell. As the action unfolds, it is clear these children carry enormous
responsibilities for their age, as interpreters, advocates for themselves and their family in a hostile, bureaucratic environment.

In a world where over 65 million displaced people are seeking a new life, free from war and persecution, these two pragmatic children are left in a small apartment, face-to-face with their fate.

Director Biography
Ali Mousawi is a filmmaker and photojournalist living in Sydney, Australia, originally from Ahwaz, Iran. Ali was the First Assistant Director for the feature ‘Revawathaye Natamam’ and Cinematographer for the feature ‘Qalamranj’ both shot in Iran. He made three documentaries in Ahwaz and three films in Australia, including ‘Man in the Mirror’ which premiered at the Arab Film Festival Australia, ‘Scourge in Darkness’ which was nominated for the best film award in International New Delhi Film Festival and ‘Uncontainable Love’ which has been screened at the opening night of Tropfest festival 2018.

Ali has recently been engaged as a cinematographer and DOP on projects for ABC’s short film ‘Queen Briany’, ‘Uncontainable Love’, Museum of Contemporary of Art, Art Gallery of NSW, Camden City Council and Australian Arab Film Festival. He has over 14 years’ experience in Ahwaz - Iran working for a variety of news agencies, including as Main Photographer for Fars News Agency (Ahwaz/Tehran) from 2011 to 2013, Group Manager and Photographer for Ahwaz News Agency and Editor in Chief, Photographer at Bejwak Newspaper (Ahwaz) in 2012 and official photographer for Parramatta City Council (Sydney).

Ali won first prize in Photography at the City and Media Festival, Ahwaz, 2010, and first prize in the Festival of Journalism in Bandar Abbas (Southern Iran) every year from 2008-2011.