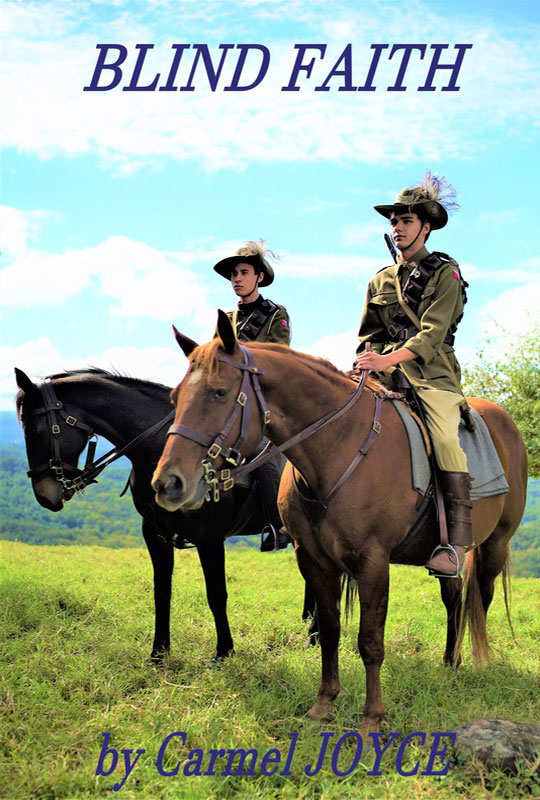 Blind Faith is a true story of seven young men whose future dreams and fate are sealed, after enlisting for the battle fields of WWI. Some will not return to their farming properties, and for the harvest reaping of their youthful endeavours.
The boys knew how to survive in the harsh and barren environment of the Australian vastness, thus believing with blind faith that their honed survival instincts alone would overcome any conflicts in another land.
They were mates long before the war began. Four are cousins growing up together in the Sunshine Coast of Queensland, while the other three are their uncles who enlist in both the Australian and New Zealand armies.
The request by the British government to both nations, Australia and New Zealand, was to supply them with an army of fit and healthy young men who were needed only, for their accurate shooting and horsemanship skills.
However, the Australian and New Zealand Army Corp’s resourcefulness and independence of action were not prerequisites, or, indeed, skills appreciated by the British command. The nations’ differences are soon highlighted through a clash of national ideologies when war games begin.
In a farming community on the Sunshine Coast of Queensland, Fred and adopted aboriginal, Jimmy, sworn to protect each other’s back, before enlisting in the Australian army. Driven by his mateship promises to Fred and Jimmy, Cousin Dave follows soon after, although in different circumstances. Army rules hold firm as brothers, Jimmy and Fred, are not permitted to serve in the same regiment, although it is obvious that they do not have the same parents.
Oldest brother and larrikin, Henry, causes his sister, Jeannie untold anguish as Fred and his adopted brother, aboriginal mate, Jimmy, enlist in the army underage. Henry is forced to reenlist in order to protect his nephew and brothers. He registers a false name so his past scoundrelous army history, is not revealed.