Kaishaku, the Honor of Samurai

The Samurai Movie with many sword fighting scenes done by the real Japanese sword masters. It is the indie Samura movie with real masters and locations that is a remaining true Samurai Houses talking about Seppuku, a.k.a. Harakiri, which is the most honorable death for Samurai.

Sword
Seppuku, a.k.a. ‘Harakiri’ is considered as the most honorable death for Samurai. It was only allowed for the respected Samurai. Kaisyaku is the person who gives the clean death after Seppuku. He was chosen from the most Important person from the man of the honor.

In Edo period, one Samurai, Kato was killed during the investigation of the corruption of evil Samurai Officer, Nakamura and Yamada. Asano Genjuro, the friend of Kato, defeated all Nakamura’s assassins by he couldn’t help Kato. Kato asks Genjuro to make his son, Kiyosada, great Samurai. However, Kiyosada wants to revenge for his father which is against the law. So, even Kiyosada succeeds the revenge, he will be executed as well. What can Genjuro do to protect the honor of Kiyosada? 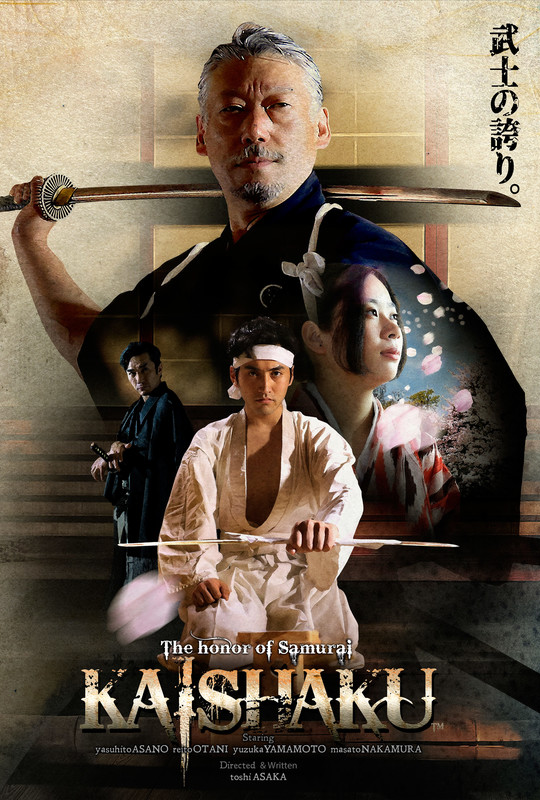 Born in Japan in 1978. Move to the US to study cinematography. After the graduation of the California Lutheran University, he immediately starts working at Hollywood entertainment industry as a camera operator, a motion graphic a designer, and an editor. He also studies Aikido at the direct school of Steven Segal and learns his style of martial arts and gets the black belt. He moves back to Japan and learns Japanese traditional swordsmanship. With the combination of his skills of creating motion pictures and the Japanese traditional martial arts, he creates actions films of Samurai based on his skills.