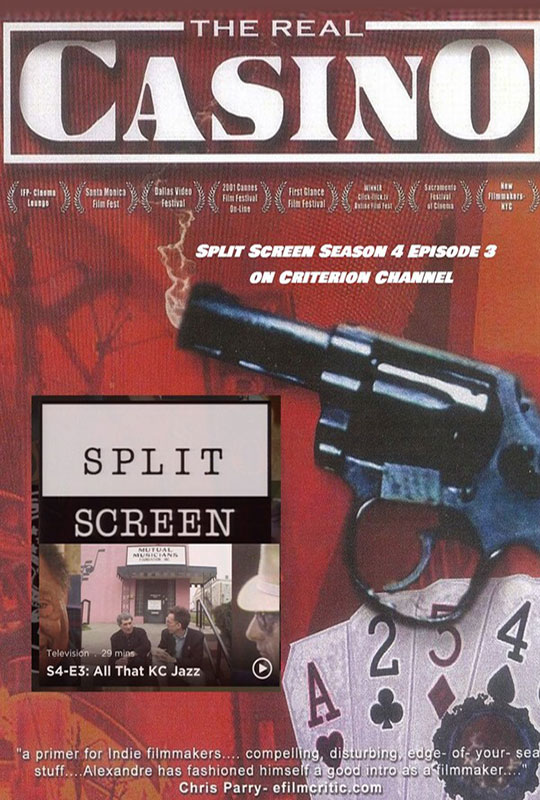 The Real Casino which is about the real Chicago 'outfit' guys who were basis for the Scorsese mob epic, Casino.

Director Biography
Joseph F. Alexandre was born in Manhasset, NY and currently lives in Los Angeles. He is a graduate of Marquette University, with a BA majoring in Political Science. Alexandre has directed several shorts and narrative and documentary features starting with Psychotropic Overload, a psychological thriller in the vein of Jodowrowsky or E. Elais Merhige. In Hock and Staying There is a narrative/doc hybrid about a no-budget Indie's filmmaker's vexing path to sustainability and success, but instead leads to a gradual descent into insanity. Into The Chasm which comes under the guise of a thriller, but is really a meditative piece on the nature of gun violence in the U.S. and offers in it's subtext a few possible reasons why. And, the truncated short version of Into the Chasm entitled Shadow Play, which stars noted stage actor and screenwriter John Crowther (co-wrote Charles Bronson film The Evil That Men Do) and son of legendary New York Times film critic Bosley Crowther. In Hock and Staying There got indie gurus' John & Janet Pierson’s attention (Janet is currently chief executive of the SxSW Film Fest) and prompted the Piersons to commission, The Real Casino, for their show Split Screen for IFC/ Bravo, where The Blair Witch Project and American Movie originated.

The full- length version Back Home Years Ago: The Real Casino aired on Image Union, WTTW Channel 11, the Chicago PBS affiliate. It has screened in some 25 festivals worldwide and is included on the TF 1 Collector’s Edition 3 disc DVD of Casino in France and all French speaking territories. It was released in the U.S. on DVD with several versions, deleted scenes, and extra interview footage and is available at amazon, netflix, and Blockbuster.com. The film has appeared on IFC, Bravo, PBS, Time-Warner cable, Moviola cable in Canada, as well as being licensed by French media giant TF 1, Delta Airlines, and Air Canada. The Real Casino is an impressionistic, de- glamorization of the Hollywood mob film, removing a bit of the sheen B-independent.com said, "it's scarier than anything in Casino or GoodFellas....", efilmcritic described it as, "a primer for Indie filmmakers..."

Alexandre is developing the aforementioned short film into a feature called WiseAcre with the attachment of Jonas Ball (The Killing of John Lennon, The Blind, and The Objective), and has written several other narrative scripts, some at studio level. In addition to his Independent film work, he has worked on larger budgeted films like the BMW Film series, The Hire, specifically, Ticker, which was directed by Joe Carnahan and starred Don Cheadle, Ray Liotta, and Clive Owen. Continuing his collaboration with Carnahan, Alexandre was commissioned by Film Engine and New Line Cinema to write a script for Joe Carnahan to direct.

Most recently, Alexandre wrote and directed the award winning documentary, Warriors of the Discotheque: The Starck Club Documentary, that premiered at the USA Film Festival in Dallas as well as Holly Shorts, New Filmmakers- Anthology Film Archives, Moors Bar screening series in London, UK and Queer Fruits Film Festival in Australia. The film is about the notorious Starck Club (so called because it was the first major project designed by Philippe Starck in North America, it put him on the map in the US.) The Starck Club opened in Dallas in 1984 and not long after hosted the 1984 national Republican Convention in the form of a “Starcktari” party complete with baby elephant. Ironically, it was actually legal to buy MDMA, aka ecstasy there, people would put it on their credit cards. The DEA stepped in and made it a category 1 drug on July 1, 1985... The Club would become ground zero for the entire rave/ecstasy scene. In addition, the club had a significant hand in introducing LGBT culture to the heart of Texas. The doc is being developed into a narrative episodic for cable, with a complete pilot and series bible.

Alexandre is currently repped by Michael Lewis & Associates and a current member in good standing of the WGA west.