The McHenry Trial – Don’t Judge a Kid by Their Hoodie 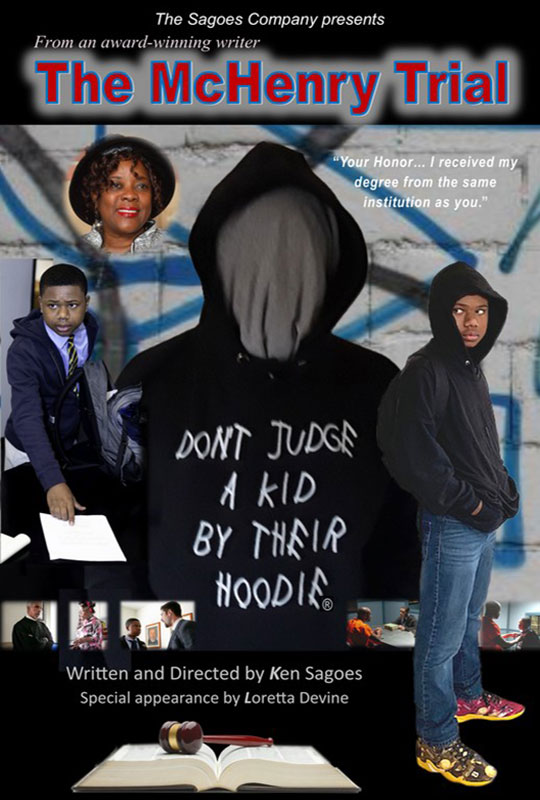 A young and brilliant academic phenom who not only passes the bar exam at age 14 but finds himself defending his homeless father on a murder charge when few believe he is innocent. He faces a shrewd law firm, an old school segregationist judge, and an arrogant prosecutor who is preparing to celebrate his 50th consecutive case win.

Ken Sagoes, born in Stockbridge, Georgia, and raised in Atlanta, is an award-winning writer and actor with film, TV, and stage credits.

He’s a former staff writer with Paramount Television, won a CableAce Award and was a HUMANITAS Prize Finalist for writing and co-starring in Disney Channel’s “On Promised Land”.

Sagoes has written fourteen plays and over thirty-five screenplays. As a stage actor, he has received several awards, including a NAACP Theater nomination for Ted Lange’s critically acclaimed play, “George Washington’s Boy”.

In film, he is best known for the role of “Kincaid”, one of the Dream Warriors in the classic horror films, A NIGHTMARE ON ELM STREET, 3 & 4, making him the first African-American actor to survive a major horror film and return for a sequel. He’s also known for John Singleton’s “ROSEWOOD” as the loveable “Big Baby” and the role of “Darryl” with Martin Lawrence in the hit series, “What’s Happening Now”.

In 1997, Sagoes founded GBC-Giving Back Corporation, a 501 (c) 3 organization that helps send inner-city youth to summer camp and helps pay for books and supplies for college-bound students. Sagoes has been acknowledged by Governors in Georgia, New York, Alabama, Michigan, Ohio, California, North Carolina, over one hundred members of Congress in various states, as well as Dr. Maya Angelou and former President Bill Clinton for his humanitarian work and giving back to the communities across the country. Former Governor Gray Davis of California proclaimed the 25th Day of April 1999 as ‘Ken Sagoes’ Day,’ and received the Los Angeles County of Probation leadership award. GBC also gives an Annual Toast/Roast to honor entertainment pioneers who have paved the way.